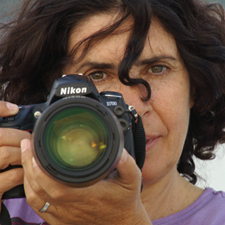 Tzeli Hadjidimitriou is a fine art photographer, film maker, travel writer and photography teacher from Lesvos, Greece. She is the author of six photography books, including the award-winning “39 Coffee houses and a barber’s shop”, “In Communion with Stone” (Crete University Press) and “Time Fading Into Clouds” (Metaixmio), with work shown in museums and galleries in Greece and abroad. She is also the author of guidebooks to the Greek islands of Kythira and Lesbos and has published many articles about her global travels to South Korea, India, Cambodia, Laos and other destinations in the Greek Press. In her Odoiporikon photography workshops, Hadjidimitriou introduces students of all levels to the “constant journey” of discovering a world flooded with light.

She is currently working as a cinematographer on a series of films, documenting a kind of life which is perhaps about to disappear, under the general title “The silent path”. Lives in a very limited frame (which we do not like to have any longer in our modern world ), but also lives where the whole meaning of life is connected with ‘little’ things and gestures (which can be good, bad, beautiful, ugly, tragic…) – and their dignity. A self-presentation of Greece ‘s vanishing values which are values of all Europeans.

“I am a storyteller. In my art I document a world that is vanishing in front of our eyes due to forces of globalization. I photograph landscapes, interior spaces, architecture and people in the fragile instant before they disappear into the past. Ruins, faded colors, old habits and faces that don’t seem to belong in the modern world fascinate me and I want them to live on in my images. I seek out subjects that feel authentic, things that are colored by the patina of time. Everything becomes more alive and present through light; this is the key to my art.”

Everything becomes more alive and present through light; this is the key to my art. I am a visual storyteller. In my art I document, in my own way, a world that is vanishing in front of our eyes due to forces of globalization. I want to give visual expression to moods and to evoke fading habits and lifestyles. I seek out subjects that feel authentic, things that are coloured by the patina of time.

Dancing Nudes: A series of underwater female nudes, taken during the last years in the sea and the baths of Lesvos, Greece. As the light passes through the water and falls on the bodies, it changes their shapes, draws magical designs on the skin and transforms them into mythical creatures that follow alternative rules, unlike those of our human experience on land. (Exhibition and book).

Silent Nights: Nightscapes taken around Eressos, during the last four years, with no use of artificial light of any kind. They “describe” the landscape as nightfall approaches, under the moonlight, or even without light at all, catching the sensitive blue intonations of the dark. (Exhibition and book).

The silent path: Ordinary people in ordinary lives as inspiration that can teach us the wisdom, acceptance and patience of a simple life.

A documentary film on the search for traces of the poet-god on Lesvos. I visit the only site of an oracle of Orpheus in the world and try to recreate the image of this mythical person who has influenced so much western art over the last 3.500 years.

The lesbian story of Eressos

Since the 1970s, women have been traveling to Eressos, the birthplace of Sappho. In some cases have even bought a property there. The story of this emigration is ignored by the people of the island, foreign travel agencies and the rest of the world. This documentary aims at understanding the role of imaginary in the construction of the concept of home and roots in the island of Lesbos, and specifically of the municipality of Eresos, as a tourist destination for hundreds of lesbians around the world.

A documentary film of interviews with the men who used to mine the stones and build the houses and churches in Lesvos. The island is famous for the architecture of the houses and the industrial buildings that were built during the 19th century and even since the ‘60s. The way they work the stones with inscribed decoration is unique. Most of these people had no education or formal training, but were able to build incredible buildings without any plans.

Founder, Wind of Creativity, a NGO dedicated to keeping the memory in Greece alive and establishing a platform for communication with the rest of the world, through light and creativity. (2014)

“Coming from a back-ground in film studies, Tzeli prefers displaying her pictures as a coherent whole and structures her photo-albums in an almost cinematic way.

“What I would like is to plunge the viewer into an atmosphere-to immerse him in a story”.

“Invariably, the story she chooses to narrate is neither about sensationalism, shock value or the pursuit of novelty for its own sake. Ignoring contemporary trends, Tzeli Hadjidimitriou turns her back on fleeting impressions, finding pleasure in the more enduring aspects of life.”

2013 “In search of Kythera and Antikythera”

A traveller’s guide about the island of Kythera and Antikythera; research, texts and photographs by Tzeli Hadjidimitriou. (English language)

A traveller’s guide about the island of Lesvos with an LGBT orientation; research, texts and photographs by Tzeli Hadjidimitriou. (English language)

2009 “In Communion With Stone, The Rural Architecture of Lesvos“

A traveller’s guide about the island of Kythera and Antikythera; research, texts and photographs by Tzeli Hadjidimitriou.  Road Editions

A traveller’s guide about the island of Lesvos; research, texts and photographs by Tzeli Hadjidimitriou. Road Editions

Photographic album. Preface to the book were the music of Mariza Coch and the verses of N. Kavvadias.  Crete University Press

1998 “Urban Housing of the ’30s; Modern Architecture in Pre-war Athens” 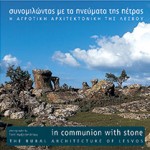 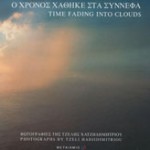 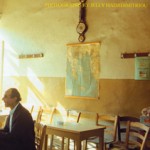 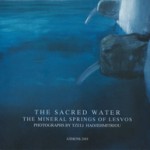 2016 “Aura from the island of Sappho”, at Space Zero, 798 Art Space, Beijing, China. The well known poet Lan Lan, presented at the opening of the exhibition, her latest collection of poems, “Sappho: A Loose Bouquet”

2015 “Lesvos, the island of hidden harmony” atSismanogleio Megaro, Greek Consulate, Istanbul, Turkey.An exhibition of photos from Lesvos, showing the unique quality of light on the island and the transformation of the landscape through it.

2002 Audio-video show: “A Journey in Kythera” at the Cultural Centre of N. Smyrni Municipality, Athens, in cooperation with the network   “Mediterranean S.O.S.”.

1998 Slide presentation of The Sacred Water and of 39 Coffee Houses and a Barber’s  Shop  at Petra Municipality, Lesvos.

1996 “The colour of Greece”, in the Municipal Gallery of Molyvos, Lesvos: of Byzantine Studies, in Venice.

2008  Audio-video show “Sacred Water” at “the Bath of the Winds” in cooperation  with the network “Mediterranean S.O.S.”.

2006  “Once upon a time there was Penelope Delta”, Athens College, Athens

2004  She participates at the Cheap Art Athens exhibitions

2004  Participation in the exhibition of the Academy of Athens, “In Praise of the Olive” and in the subsequent publication.

2003  She joins the girl power team and participates in the events organized in cooperation with the Hellenic Cancer Society and the Municipality of Athens.

2000  “Water of life”, participation in the celebrations of the European Heritage Days

2000  “39 Coffee Houses and a Barber Shop ” based on her book with the participation of several artists, at “Psihari 36″ Gallery, Athens

1999  “Mediterranean, A Source of Life and Civilization”, in cooperation with the network “Mediterranean S.O.S.”.  The exhibition has traveled the next years around several Greek towns and Mediterranean countries.